It's been a minute since i've updated anything here. That's because i've been busy getting back to work and between that and raising a 2-year-old i haven't really been keeping up with the site as i should. Anyway, i've been gigging like crazy hoping that this new wave of the 'rona doesn't sidetrack us all and lock everything back down. I've also gotten into the studio a couple of times to work on getting a couple new songs started and i also reached the 400 episode mark of the SOTC facebook livestream series. Crazy to think that i have done 400 of 'em already. As slow as 2020 seemed to crawl by 2021 is flying by and it's hard to believe it's already August.

I'll try to stop in and update a bit more often. For now, here's the vid of SOTC 400

looking on the bright side

I've been really remiss about updating this blog and i've got no excuse for it seeing as i haven't been able to gig for the last few months. Anyway... We've been dealing with this 'rona thing for way too long now and as uncomfortable and inconvenient as it's all been i started thinking that it has actually had a few benefits for me and i thought my "look on the bright side" might be worth sharing.

When i first realized that everything was shutting down and my only source of income (i.e. playing live music) would be cut off for the forseeable future i decided to try my hand at the live streaming thing. I thought that maybe i could earn a couple of bucks via a virtual tip jar by playing live on my facebook page and not have to burden the wifey with paying all the bills so the Carl "Stuck on the Couch" concert series was born. I was not the only musician to think of this. We were all scrambling to figure out a way to not "lose the farm" so lots of my music pals did the same thing. Most of them just did a stream here and there, some did a regular weekly stream, and a few even did two or three days a week. For whatever reason i decided to go all-in and just play every night.(I'm still not really sure why.)  I will do my 108th straight stream later today. I never would have guessed that I would have done this for more than 10 or 15 days, let alone over 100. It's almost unbelievable. One of the main reasons that i've continued to do it is that all of the folks who show up to watch and listen every night have become like a kind of 2nd family to me. We really have developed a little community that gets together every night "on the couch" to hang out and it's been really moving to be a part of it. Hell, they even started calling themselves the "couch potatoes" and the "spuds".  It has saved me from going crazy and apparently i'm not the only one. I've nearly come to tears when people have related to me how much it has meant to them to have something to look forward to every night when 6:30 rolls around. I have always known that music has the power to bring people together but this unfortunate situation has proven it and i'm grateful for that.

I've also joined a new songwriting group, collaborated with a few new co-writers (even one in south africa), and had a chance to write a bunch of new tunes. In doing so i've discovered that some of the songs i would ordinarily have thrown out without ever even bothering to play for anyone have become some of my most requested songs. Whoulda thunk it? As a result i've decided to record stripped down versions of them to release and that's one of the things i'm currently working on.

Lastly, i've enjoyed having the opportunity to spend a ton of quality time at home with my family. While a 1 year-old can sometimes test one's patience it's amazing to be able to witness his day-to-day growth and be a part of every day with him and his mom. We sometimes all drive each other a little crazy but i wouldn't change a thing.

Anyway...... those are a few of my silver linings. Tell me a few of yours.

Hope to see you "on the couch",

hope you are all doing fabulously well. As for me, i've still been a busy little bee lately. I've been hard at work with my hard rock project Splintered Mind as well as trying to schedule time to finish some more of my solo stuff, all whilst trying to do my best at learning how to be a first-time dad! What? Check him out! This is my boy Cole Anthony. As you can see, he's already quite a character and already the biggest part of my life. He came into the world on June 17th and I can't wait to teach him all about the music i love. Hopefully he'll see what i see in it and be moved the way that i am.

Needless to say, Cole's entrance into the world has taken precedence over just about everything else but i'm still planning on finishing more music, both solo and SM related, before the end of the year. As a matter of fact SM just released another single (our 3rd) this week. You can hear it here if you're so inclined. It's a bit different than our first two releases and it highlights our attitude of making music that has no rules. It still leans toward a hard rock sound but doesn't really sound like anything else out there. I like to say it's like if the Foo Fighters wrote a song with Steely Dan. We're also currently putting the finishing touches on our next release which should be out within a month or two if all goes according to plan.

Thanks, as always, for your continued support.

Hope to see you at a show sometime soon.

So much to tell. I've been a busy bee since my last 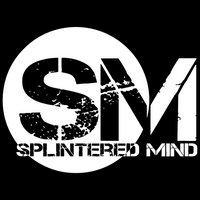 update but i'll try to be concise. First things first, my hard rock project SPLINTERED MIND is finally puttting out our first single which is appropriately titled Starting Now. It will be available via most of the usual spots i.e. Spotify, Apple Music, Itunes, Amazon music etc. Click the logo to the right to pre-save on Spotify and be entered to win a FREE T-SHIRT or click here to pre-order on Amazon.  We've also got our own website at SplinteredMindMusic.com where you can get our latest news, stream music, or buy merch. Please make a visit. 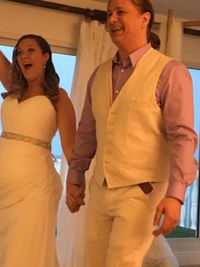 In other news, my sweetie and I tied the knot last week! We went to sunny Florida for a beautiful and intimate beach wedding. Unfortunately mother nature had other plans and dropped a few tons of water on us on the day of our nuptials. Though we had to move it inside we defied mother nature and got it done anyway as the photo on the left plainly shows. The rest of our week was beautiful, sunny, and warm and we had a fantastic time. I may or may not have enjoyed a mai tai or 3. 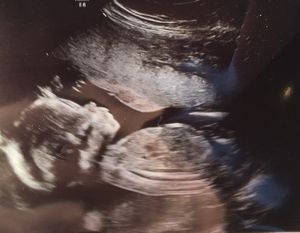 Lastly, and most importantly, I will be releasing my best and most amazing single this coming June. Little baby Stuck will be making his debut appearance and I couldn't be happier or more excited about it!

So if you need an additional reason to buy or stream my music please let baby Stuck be it so i don't have to put him to work... haha

My newest release is finally here! YES! I'm super stoked to finally have it out there. You can hear it on all the usual streaming outlets, buy it on CDBaby, amazon, and itunes, or watch the video right here. I can't wait to hear what you think! And if it ain't too much trouble please add it on whatever your service of choice is. 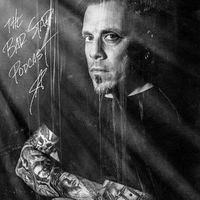 Steven O'Reilly on a bonus episode of his Bar Star podcast. Check it out when you get some time. He talks to a lot of people in the music business that you may not be super familiar with and is quite entertaining. Click the pic to hear that.

Hope every single one of you has an absolutely wonderful Christmas (or whatever else you may celebrate) and i look forward to playing music for you soon!

Back from the CDBaby diy musician conference in Nashville and fired up to get back to work to get some more music out and continue playing shows to promote it. I'm still hard at work on both my solo project and my rock project with Phil Bright (which we have tentatively named "Splintered Mind" see video above.) My new solo single will hopefully be out by the first of the year if all goes as planned so watch for a pre-save campaign coming soon.

I'll be appearing as part of Bryan Fox and the Good Chiggens for a show at Nashville's "The Local" venue on September 21st. Nashville friends please stop by and say hello.

I'll also be appearing on both days of the Belknap Festival in Louisville, KY which happens October 12th and 13th. On the 12th I'll be doing a solo set and I'll have copies of  a CD of stripped down versions of several of my tunes that is only available at live shows.  On the 13th I'll be joining my friends in Mary Mary for a fun set of rock 'n' roll.

Lastly, if you have a second please follow me on Spotify, Pandora, Apple Music or your favorite streaming service. Your follows and thumbs up will help make my music more visible and increase the chance that the algorithms will take notice so I super-appreciate the effort.